Contact Stores
In My Bag
Your bag is currently empty.
Sub-total:
Saving:
Total:
Delivery cost will be calculated at checkout
View Bag (0)

When we found out we were pregnant, I swore I was going to talk more about fertility and fertility treatment, to do my bit to make it that little bit more okay to talk about.

What I didn't think about was how hard that is to do. Everyone’s journey is different, but mine is painful to think back over, despite the positive outcome.

I was diagnosed with PCOS when I was around 14, by a flippant doctor who told me "you've got PCOS, so you probably won't be able to have kids". If I'm honest it didn't really bother me at the time, but as I got older it was something that played on my mind a lot.

Having a family was something I was really passionate about. My wife Kelly was initially always going to carry our first child, mainly just because she's older. However, after seeing the GP and doing the initial tests, it was suggested that I went first, as due to the severity of my PCOS, the sooner I started trying the better. 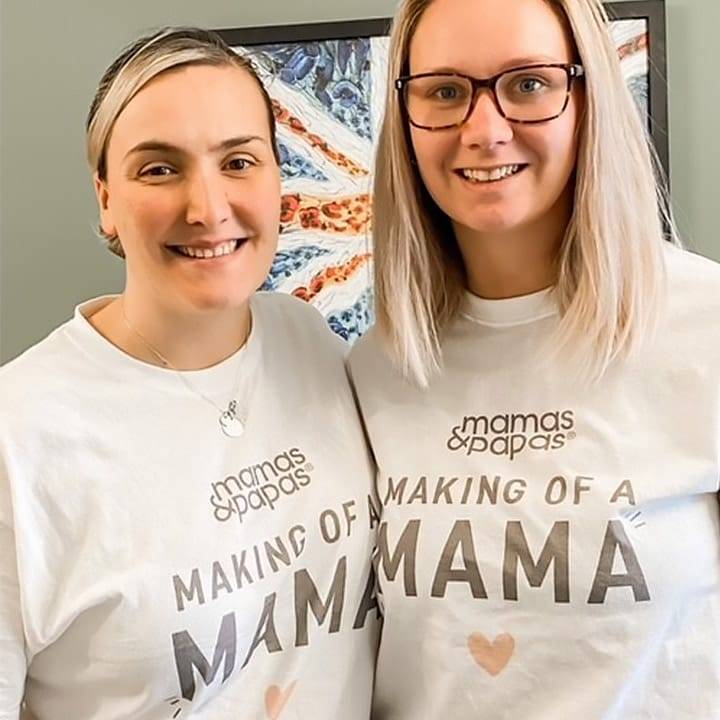 Starting treatment was so exciting, I hardly slept the night before. Although I knew the journey could be a long one, we were starting it!

We had IUI treatment, and for anybody unsure, the difference between IUI and IVF is that with IUI you don't take your eggs out, you just get them to the right size and inject the sperm into you, in the hope it catches on to an egg, latches on and stays. With IVF, your eggs are taken out, the sperm is put in and if they connect then they're put back inside you.

We decided to go to the NHS for our treatment, as we knew a few couples who had taken that route and gotten pregnant, so they highly recommend them. We did go and look at some private clinics, but both Kelly and I decided to use it if nothing else was working. It also helped that I'd generally always have my appointments early and go straight to work, which ideal when you don't want people to know, as it doesn't arouse much suspicion. The downside of that is that I'd quite often leave the hospital following more bad news, drive to work, park my car and spend the 15 minute walk sobbing in a desperate attempt to pull myself together by the time I reached the front door of work. And then I would smile and pretend everything was great.

I started off taking a drug called Provera before every cycle, to force my body to have a period, as it wouldn't have one of its own accord - a lovely perk until you actually really need them to get pregnant! Then I went onto Clomid, but my body had no response. I then tried Gonal F, which is an injection pen - a little like what diabetic people use, except a much longer needle!

My dosage was increased over a number of days, and then followed with a drug called Ovatrelle, which forces your body to ovulate and release an egg. This really stung to inject, and because of how high the dose is it takes an age to get it all in. But this didn't work either – I ended up overstimulated, which means my eggs were too big for the 2mm window needed for treatment. You can have no more than 2 eggs measuring 1.5cm and no more than 1 egg measuring 1.7cmm, which isn’t a lot to go on when you can't control individual egg growth!

After decreasing my dosage of Gonal F and Ovatrelle, we ended up with the winning ticket and despite everything (it really shouldn't have worked!), I got pregnant. Throw this in with four or five blood tests, a counselling session and easily over 40 scans. All whilst paying for the privilege of emotionally and physically battering yourself month after month after month.

I can't stress enough, if you know anyone going through IVF, IUI or any type of treatment, please be kind. It's hands down the hardest, loneliest and most emotional thing I have ever, ever had to deal with.

Once you have the sperm put in, you have a two week wait that feels more like six years, and your brain goes into overdrive whilst you wait to see if you're pregnant or not. You're advised to wait the full two weeks before doing a pregnancy test, as the drugs you're given could produce a false positive if you test too early. For the first week after implantation I just took it really easy – I ate super-healthily and added in lots of extra vitamins and nutrients into my diet, including a VERY green smoothie every morning! I also lay on my back with my legs in the air against the wall for about 40 mins each morning and evening. There’s absolutely no science to say any of this stuff works, but it helped to settle my mind.

On day 10, I started feeling really sick, a little clammy and just not myself. We both started getting excited that it could have worked, but you also settle yourself very quickly, just in case it’s not.

By day 11, I was feeling worse – really queasy with a shocking headache that just wouldn't shift! By Day 12, I was just tired. We’d been food shopping and were at home popping the food away. I nipped upstairs for a wee and figured I'd do a test so we could rule it out. I came downstairs and just put it on the kitchen side whilst we carried on. I told Kelly that I'd done a test, because I wanted to start coming to terms with the fact it hadn't worked, and we just left it there until we'd made some dinner and were heading into the other room. 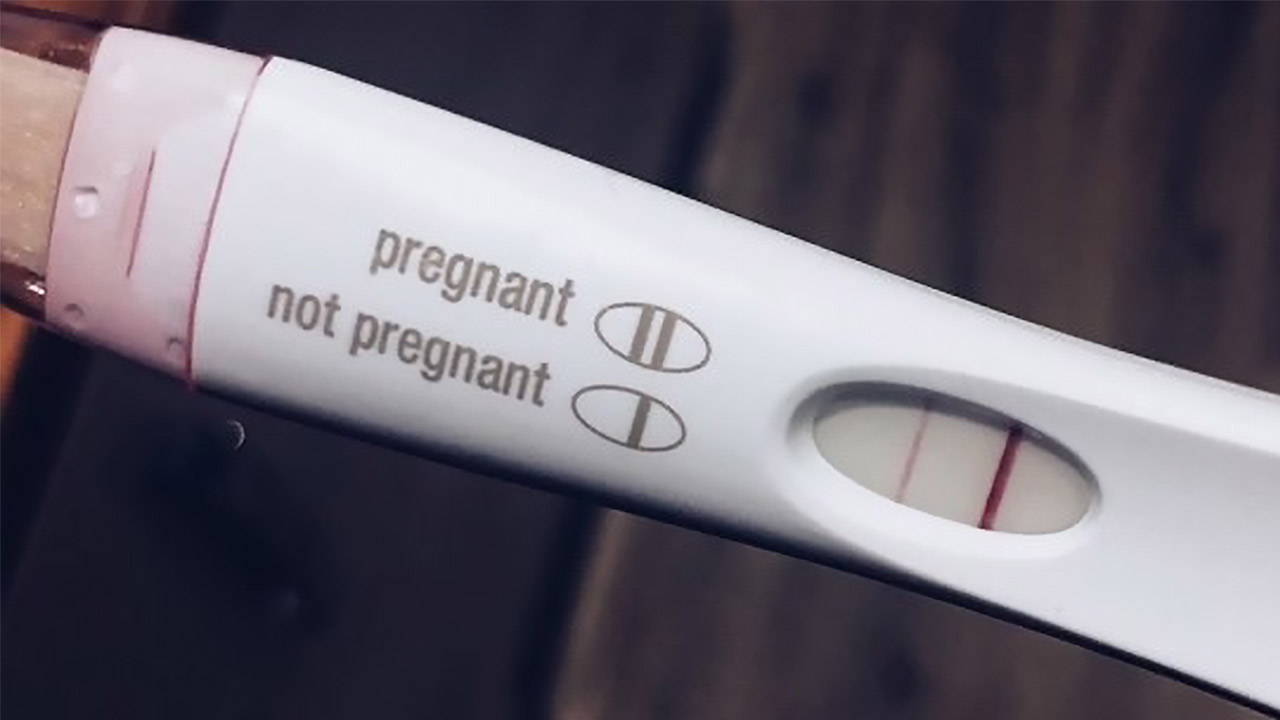 Then this happened... We were pregnant!!

Obviously, I then tested every day for the next few days...you need to be sure of these things! 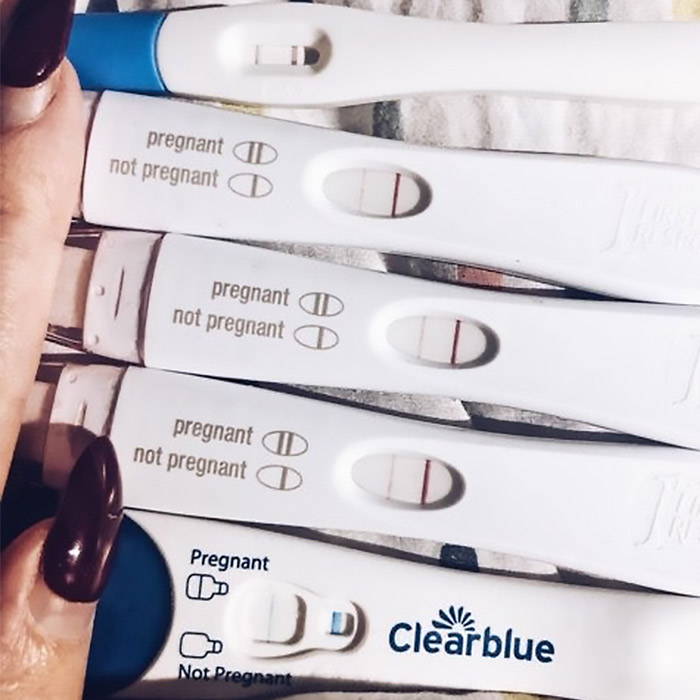 I was lucky that I went through it all with Kelly. She came to every scan, appointment and blood test with me and she was a huge support, but I also felt extremely alone. Although we were in it together and this is 100% our baby, it was me injecting and taking different drugs, it was me trying to deal with absolutely raging hormones. It was my body that wasn't doing what it should be, it was my body not responding. I felt like I was failing as a woman and my body was failing me.

Everyone deals with things differently, and Kelly’s way is to be super-positive and not let any emotion show in an attempt to help me cope. My way is to grieve, be angry, read books, forums and medical journals on treatments, side effects and doses. Anything to give me some hope that this hellish journey would end. But with that brings frustration, I'd get annoyed that Kelly wasn't bothered, that she didn't show any type of emotion, and wasn't showing an interest in researching what we were doing. Kelly would get annoyed that I was dwelling on it, she would get frustrated when I just couldn't talk about it – but it was because I was just so angry.

In the end we found a middle ground. After every cycle I had 24 hours to be as sad as I wanted. I could shout, scream, cry, sleep – whatever I needed. During that time, she dealt with everyone else. She would be the one messaging family to say it hadn’t worked – the one thing I couldn't do. In that first 24 hours I couldn't acknowledge it, I didn't want people telling me to keep my chin up, or that the next cycle would be the one. I couldn't cope with it.

I will be FOREVER grateful to Kelly for doing that, she took the weight from me and let me just process in my own time

Looking to the Future

Pregnancy is a whole other journey, and something I'll talk about another time. But I hope you’ve found reading about our journey useful, and if it helps just one person...that's good enough for me.

Find out more about their journey here

Hurry! Our sale ends in: